Wow-what a way to start 2021.  US equity averages hit another set of all-time highs despite Washington’s political turmoil and a Democratic sweep in the Georgia Senate runoff elections.  Economic data continued to be mixed, but investors looked past a disappointing December Employment Situation Report to the possibilities of even more economic stimulus. 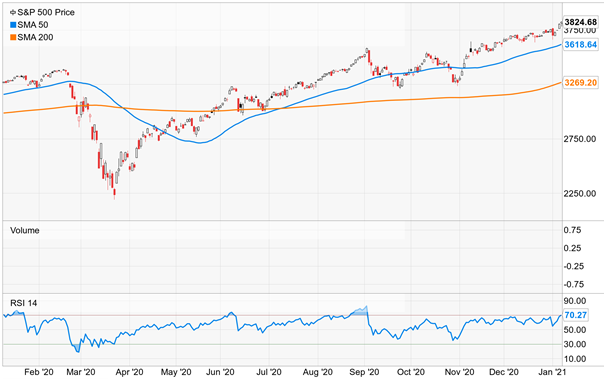 A Democratic sweep in the Georgia Senate elections gives the Democrats a slim majority in the Senate and opens the door to perhaps a more robust Biden agenda.  Investors were unfazed by the results and perhaps recognize that such a small majority will curtail radical policies.  Additionally, the win seemed to bolster the probability for even more economic stimulus.  Late in the week, President-elect Biden proposed a 3 trillion dollar spending plan with 2 trillion earmarked for infrastructure and green jobs.  The notion of more stimulus coupled with an enormous spending plan hammered longer-dated US Treasuries.  Political turmoil at the US Capital was nothing short of astonishing.  Congress had convened to certify the Electoral College results, but the process was disrupted by protestors that laid siege on the Capital.  Eventually, order was restored, and Congress was able to certify the election.  In the aftermath, several of the President’s cabinet members have resigned due to the President’s rhetoric that seemed to have provoked the siege. Some have called for Article 25 to be invoked, which would remove the President from office, while the Democrats have threatened impeachment of the President.

The Employment situation report for December showed that non-farm payrolls decreased by 140k and that the three month average of payrolls had declined to 283k from 522k.  The unemployment rate stayed steady at 6.7%.  Average hourly earnings showed a nice tick up of 0.8%, which brings the 12-month increase in earnings to 5.1%.  The labor participation rate stayed the same at 61.5%.  Initial claims were down slightly for the week at 787k, while continuing claims fell by 126k to 5.072 million.  ISM Manufacturing and Non-Manufacturing showed continued expansion with readings of 60.7 and 57.2, respectively.   Notably, PMI manufacturing figures were also better than expected in Europe.