Markets continued to be volatile in the first week of December.  Fed Chairman Jerome Powell and Treasury Secretary Janet Yellen struck a more hawkish tone during their semiannual testimony in front of Congress. Powell’s suggestion that the word transitory should be dropped when discussing the current inflationary environment rattled the bond market, and his suggestion to hasten the pace of the QE taper sent a message to the market that the Fed may be on the cusp of a policy mistake. Rates on the front of the curve were noticeably higher, while the back of the curve rallied on the notion of a policy mistake.  Growth-oriented issues took the brunt of the market’s decline as valuations metrics were questioned. If Fed speak was not enough, a new variant of Covid dubbed Omicron emerged as a prominent concern, varying opinions emerged about the new variant’s effects on the economy, public policy, and fostered debate around the future of Covid mutations.  Politicians were able to pass a stopgap bill to keep the government funded but seemed further apart on Biden’s “build back better” initiative.  However, the agreement to fund the government did not address the pending debt ceiling issue, which is set to expire on December 15th.  Economic news showed progress in the services part of the economy but also delivered a disappointing Employment Situation Report that may push the Fed to rethink its current policy path. 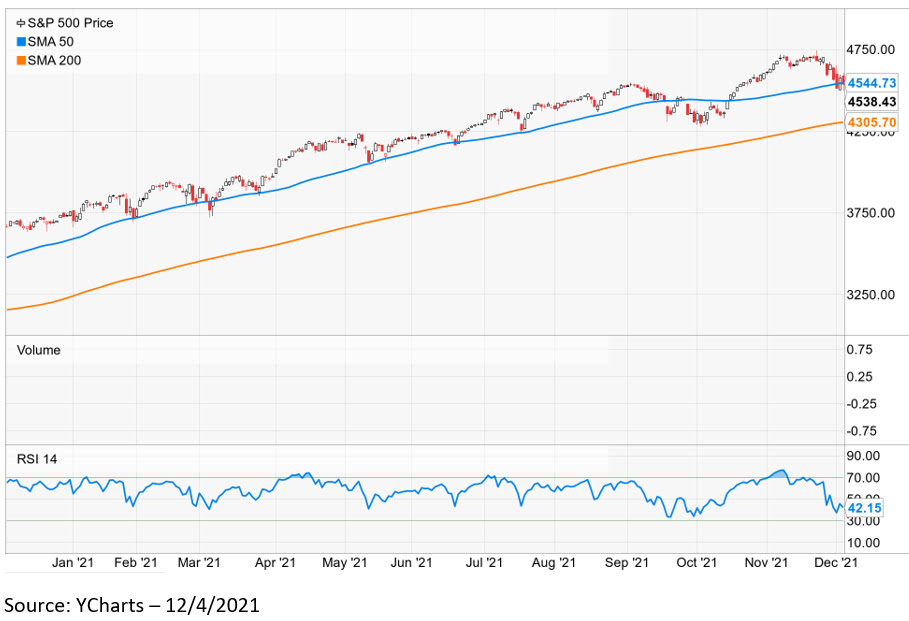 For the week, the S&P 500 declined 1.2%, the Dow lost 0.9%, the NASDAQ fell 2.6%, and the Russell 2000 lagged again with a loss of 3.9%.   High valuation sectors were called to the mat on a more hawkish Fed- higher rates call into question higher valuations.  Interestingly the bond market went the other way suggesting the Fed’s most recent assessment is wrong.  The 2-year note yield, which is more influenced by Fed policy, increased by eight basis points to 0.58% while the 10-year yield fell eleven basis points to 1.34%- the flattening move was even more pronounced in the 30-year yield that fell sixteen basis points to 1.67%.  Gold was little changed on the week, falling fractionally to $1785.70 an Oz.  Oil continued its recent descent with a 2.6% decline.  OPEC +’s meeting yielded no change to the existing policy that is set to increase supply by 400k barrels in January of 2022.

Economic data was mixed.  The Employment Situation Report came in below expectations and cast some doubt on the recent rhetoric out of the Fed.  Non-Farm Payrolls came in at 210k, well below the forecast of 540k.  Private Payrolls also missed estimates coming in at 230k versus the consensus estimate of 500k. Preliminary Consumer Sentiment out of the University of Michigan fell to 109.55 from 111.  On the other hand, ISM services picked up and were much better than expected.  Services make up over 70% of our economy, and the pickup is an excellent sign.  Interestingly, we also saw a pickup in services in global ISM data.  High-frequency labor data showed better than expected Initial claims while again showing Continuing Claims trend to lower levels.  Next week all eyes will be on the CPI (Consumer Price Index) data along with Consumer Sentiment data.